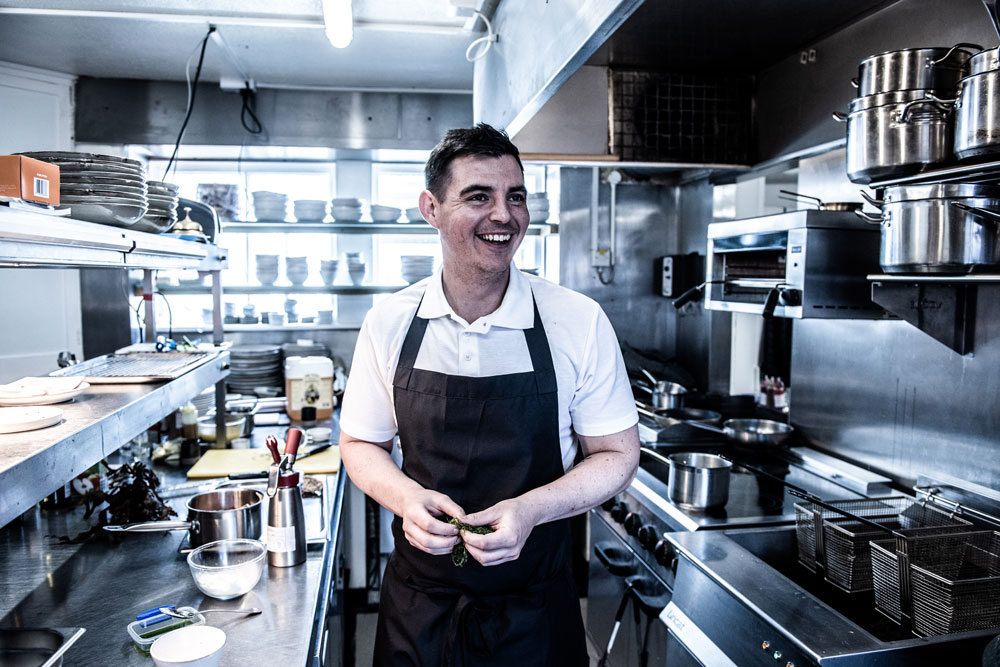 Foodies far and wide will be excited to hear that BBC Two’s Great British Menu returns to our screens this week with a brand new format and in a new primetime slot starting at 8pm on Wednesday 20th March. Here at Stargazy Inn, we’re waiting with bated breath for the Welsh regional heats to see our new Head Chef, Andrew Sheridan, take up the challenge!

This year Great British Menu will mark the 50th anniversary of the last time The Beatles played live together and celebrate Britain’s continuing success as a world player in music. Only two chefs will make it through to each regional final where they’ll need to convince the expert panel of judges Andi Oliver, Oliver Peyton CBE and Matthew Fort that their dishes deserve a coveted place in the national finals – and a potential spot on the final banquet menu at Abbey Road Studios. You’ll have to watch to find out how Andrew gets on in the competition!

Andrew will go head-to-head against Tom Westerland of The Brasserie at Lucknam Park Hotel, Wiltshire and Cindy Challoner, formerly The Classroom, Cardiff.

We caught up with Andrew to find out about the pressure of taking part in Great British Menu and what inspired each of the four dishes he created to pay tribute to the NHS.

The brief this year was to celebrate British music. What was the inspiration behind your dishes?

The brief to create dishes to celebrate Britain’s continuing musical success was a lot easier than last year’s (to celebrate the NHS), because music and food have so much in common. I found lots of strong connections from music that inspired my dishes.

As I was representing Wales, where I grew up and have worked most of my life, two of my dishes were inspired by great Welsh artists – Tom Jones of course, and Shirley Bassey’s. As a kid I was a huge James Bond fan, and Shirley Bassey’s Goldfinger has got to be the most iconic Bond track of all time!

My other inspirations also came from my childhood and younger years – nipping across to the chippy over the road to get fish & chips to watch Top of the Pops every Friday evening with by brother and my teens spent going out with mates and listening to Oasis on repeat!

This is the second time you’ve appeared on Great British Menu, did you find the pressure easier second time around?

It should have all been easier this time around, but actually I found it harder! I think it was all because I was putting more pressure on myself to get through to the banquet this time. I’m so competitive I put everything into to get through.

What was the best part?

All of it! The pressure is intense but also incredibly rewarding! It was one of the hardest things I have ever done and the most enjoyable.

I met some amazing people and it has also made me release how far I have come in my career. Being a chef can be lonely sometimes, we’re all so busy in our own kitchens that we don’t get out often enough to meet and talk to each other. Being part of the Great British Menu is a brilliant opportunity to spend time with other amazing chefs, to be inspired by each and build strong friendships.

What was the toughest thing?

The daily judging! It’s great getting feedback on your dishes from the other chefs, but of course, what really matters is what the judges think! It’s a gruelling process going through that and waiting for their response.

I barely slept a wink the whole week we were filming!

How do you look back on the experience?

It was both the hardest and the best thing I have ever done in my life. It proved to me that I’ve still got what it takes to be truly creative in the kitchen and took me straight back to my roots. At Stargazy Inn I run a team of chefs, on Great British Menu I am Head Chef, Sous Chef and Commis all at the same time!

Would you do it again?

If I was offered the opportunity – yes without hesitation! It’s just the kind of person I am – ambitious and competitive, I love the pressure!

Only two chefs will make it through to the Friday regional final where they’ll need to convince the expert panel of judges that their dishes deserve a coveted place in the national finals – and a potential spot on the final banquet menu. You’ll have to watch to find out how Andrew gets on in the competition!

SIGN UP TO STARGAZY NEWS FOR EXCLUSIVE OFFERS, COMPETITIONS AND MORE